For our Mini Tennis players but creative adaptions can be made of course for all levels.  A 'self-rally' using legs to 'lift' the ball to just above head height keeping racket face flat and wrist stable.  Progress from forehand to backhand and then alternating.

Another day of glorious sunshine - let's try and enjoy what's been given to us to enjoy in a responsible way!

It’s a ‘self-rally’ today for our younger generation @everyballtennis but adults can have a go too! Use the legs to ‘lift’ the ball. How many can u get? Can you adapt the exercise? I’d love to see! @haltonuk @prov3_halton

Stay as active and positive as you can and enjoy what you can of this lovely weather! (whilst not ignoring school work!)

A couple of little exercises on the serve today - kneeling down so not gonna burn too many calories but a couple of key aspects to developing a great serve.  Pronation - the outward turning of forearm and wrist to present the racket face to the ball (assuming continental grip and you are approaching the ball with the edge of the racket), and internal rotation of the hitting shoulder/upper-arm which can contribute to up to 70% of your power on the serve within a shoulder over shoulder action.

Have fun with it

Good morning (at least here in Britain)! Well it’s well and truly ‘stay at home’ so I hope these little exercises help keep your skills up! A couple of simple ones on the serve today! Stay well @everyballtennis @haltonuk @prov3_halton

No better time to be living out our Everyball 4 R's:

Respect each other in the home and take responsibility for your own behaviours and emotions.

Be ready to 'bounce forward' with ﻿Resilience into a new future and Reflect on how we can do things just a little differently.

Show your own P.R.I.D.E (personal responsibility in developing excellence) by devising your own training sessions at home and keeping up with your skills and fitness so you're ready for action when we can get back to the court, and....TRY THIS LITTLE DRILL to work on your legs and half-volley!

Today’s DIY at home drill is on the half volley. Have fun!!! @everyballtennis @haltonuk @prov3_halton

Hello all and a happy mother's day to you in these trying times...

Here's a few tips on improving your backhand slice at home.   Racket, ball, wall an a bit of will and patience and you'll have it down soon enough!

Improve your game at home against the wall. A few tips here on how efficient body work supports effective racket work for a ‘through’ the ball feeling on the backhand slice @everyballtennis @haltonuk @prov3_halton

Dear Parents/Everyball Tennis @ Halton Tennis Centre customers,
In light of yesterday's news and upcoming school closures I would like to update you on our short-term plans for our coaching programme at Halton.
After careful consideration and gathering of feedback from many parents of children on the Everyball Coaching programme we have decided to continue with the utmost caution and care - and this on a day to day basis.  We will be rigorously pursuing all protocols as set out in previous communications.  All children should come prepared for both indoor* and outdoor tennis as we will be using all our court facilities to spread out and maintain appropriate distancing between all.  We count ourselves fortunate at Halton to have a very nimble leadership and management model where we can continually respond and adapt to changing circumstances, and a sport and facilities that lend themselves very well to social distancing and maintaining the utmost cleanliness.  Whilst we fully understand and respect the needs of those who must or prefer to stay at home, we very much welcome those of you who would still like to get out on a tennis court with an 'exercise not socialise' agenda, one currently supported by the LTA and Sport England.
While the LTA has suspended its organised activity, the Government have currently indicated that recreational exercise that takes place at a safe distance from others and in safe exercise environments is something that can continue during this period (LTA website)

The coronavirus crisis is unprecedented in modern times and it could have a significantly negative impact on the nation’s physical activity levels.  We don’t want that to happen, so we'll do everything we can to support people to get and stay active – provided they are well enough.  That’s because physical activity matters during this period and, actually, we think it’s more important than ever right now.  Being active in a way that is right for you, can improve your physical health, help manage stress and anxiety and just generally make you feel better.  You can also still go outside for a walk, run, cycle - or any other way you normally get active outside - provided you are doing so in a way that meets the latest guidance on social distancing and advice on unnecessary social contact (Sport England website)

For Saturday morning customers please note that our bar and catering service has been very much trimmed down and we will be only offering takeaway tea, coffee, soft drinks, and snacks during this time.  There will be no kitchen service.

*Indoor tennis - whilst we will look to get outside as much as possible some sessions will continue in our indoor air domes.  Do please remember that fresh air is constantly being circulated within these facilities.
Finally, there may well be a possibility of putting on some extra daytime tennis activities for kids out of school next week.  We are currently assessing the practicality and nature of this in line with maintaining a responsible attitude and position to the war on the corona virus which we are taking very seriously indeed.  Any feedback you might have on this as parents would be much appreciated, and of course if you have any questions at all please do get in touch.
With our kindest regards and wishes of wellbeing for all,
Mike James
Director of Tennis

At the start of another week, I just wanted to touch base to say that all coaching sessions at Halton Tennis Centre will carry on as scheduled.  The latest advice from the LTA can be found on their website via this link which is regularly being updated and of course as an organisation at Halton we are taking heed of all government advice.

As the COVID-19 pandemic progresses, we will be taking some further precautions to ensure children and parents' safety at lessons and during drop-off and pickup and would very much appreciate your help in this.

We will be taking all precautions around the club as directed by Public Health England and are pleased to say that all our tennis activities will continue and normal.  Look forward to seeing you on the courts!

You might have heard a little bit about proV3, one of our charitable projects at Halton Tennis Centre/Everyball Tennis that aims to support aspiring, yet vulnerable tennis players develop sustainable professional careers on the tour.  As it happens all our proV3 players are back at base next week due to international events being cancelled due to the coronavirus so we thought it would be a good opportunity (if not last minute!) to hold a meet and greet coffee morning and talk about the project and how our players are getting on.

Read on for a little more info: https://everyball.uk/page/prov3
If you happen to be free at this late notice, I'd love to invite you down to join us for an hour and then stay on for a while and hit some balls with our players from 11.30 or failing that just watch the action!
Perhaps see you Monday!
Beth Grey below at Wimbledon in 2019 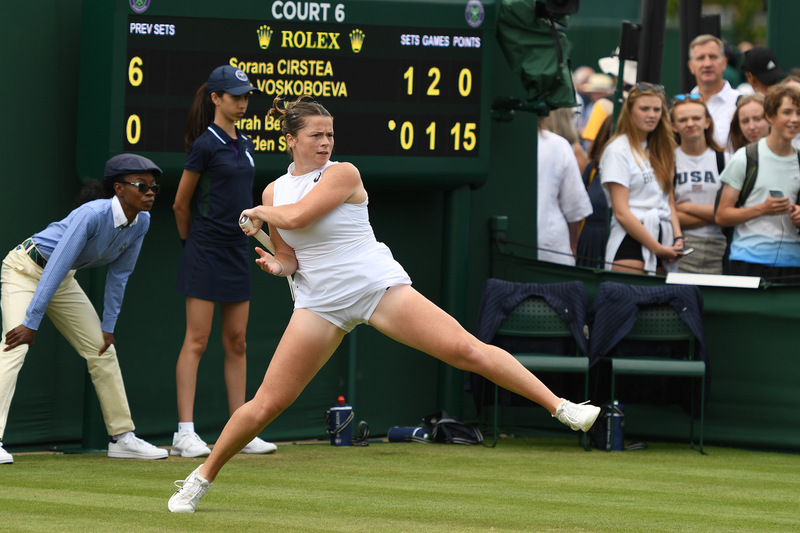 Renowned sports psychologist Dr. Jim Loehr breaks 'character' down into what he calls 'performance character' and 'moral character'.  He suggests that sport in of itself does not build character, but that character can be built through sport only with a strong intent to do so, followed by a highly structured plan of implementation.  Coaches and parents are critical in this process.

He distinguishes two types of character that can be intentionally built through sport.

Especially at the top level, the 'seduction' in sport is unbelievable....the temptation to cut corners, cheat, take drugs, etc.   The relationship between sports development and character development is an inverse relationship (the longer you stay in it there is more chance of sport having a negative impact on character) but we (particularly coaches and parents) can intentionally use the demands of sport to build strong, healthy, principle centred people.

And, finally, you can 'win' with good character.  The two are not mutually exclusive as some would like to say. Building strong performance and moral character helps you to handle better the high demands of performance sport, particularly if you reach the very top.

(Taken from a talk by Dr. Jim Loehr to USTA coaches)

Fighting for everyball is a mentality as well as a technical, tactical and physical skill.

The best players do the basics brilliantly rather than brilliant flashes!

Hello and a thanks for visiting my blog - a platform for my views, musings and observations through my work as an LTA L5 Master Performance Coach and Coach Education Tutor (currently delivering the L4 SPC) and author of the book, 'Everyball - Reflections, anecdotes and observations from a life in tennis aimed to tool you up for the game of life!' of which I am now writing a second edition! You may be looking for the home sites of Everyball Tennis and Halton Tennis Centre? You'll find these in the links below. For my own personal service offerings please click on the coachingbymike link. Thanks a lot and look forward to being in touch!